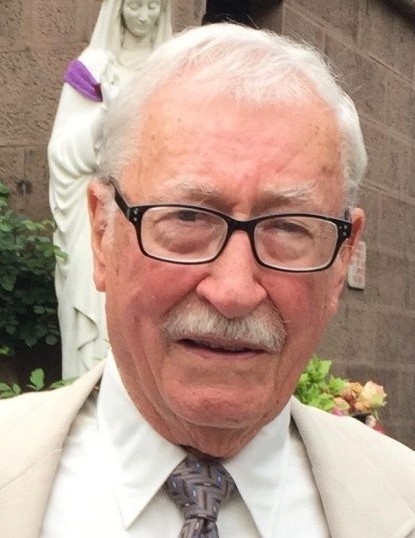 Andrew Frank Hubeny, 87, “Andy” of Southington, died at his residence on Sunday, January 19, 2020 after a short illness. He was the beloved husband of the late Dorothy (Pierson) Hubeny, Ph.D. for 28 years.

Born on July 4, 1932 in Southington, to the late Andrew Frank and Veronica Ann (Kobylarz) Hubeny, he had been a lifelong Southington resident.
Andy had a full life and he always felt blessed with his good fortune. He had endless stories of his military service which spanned over 30 years. He took advantage of the GI Bill and went to Cheshire Academy in preparation for Central Connecticut Teachers College (CCSU) where he graduated in 1958. Andy was a lifetime educator and never stopped learning. In 1959, he married Janet Tyman and had his first two children Elise and Jeffe. In 1983, he married Dorothy Pierson and enjoyed many years with her and her daughter Anne until Dorothy’s death in 2011. In 2017, Andy discovered yet another blessing, when his son James Vaille and family came into his life. He will be remembered for his positive demeanor and his friendships with many.

Andy is survived by four children, James Vaille and his wife Sue of Massachusetts, Elise McDermott and her husband Paul of Middletown, Jeffe Hubeny and his fiancé Laura Hart-Smith of Southington, and Anne Miller and her husband Christopher of New York, 8 grandchildren and 8 great-grandchildren. He is also survived by four sisters, Doris Telke, Elinor Brunoli, Annette D’Agostino, and Veronica Bock, all of Southington and many nieces and nephews. In recent years, Andy met a very special friend, Suzanne Perschy, who filled his life with friendship and companionship. He will be deeply missed by all of his friends and family.

In lieu of flowers, donations in Andy’s memory may be made to Friends of the Southington Library, 255 Main Street, Southington, CT 06489.

Funeral services will be held at 10:00 a.m. on Friday, January 24, 2020 from the Plantsville Funeral Home, 975 S. Main Street, Plantsville, with an 11:00 a.m. Mass of Christian Burial at Mary Our Queen Church, 248 Savage Street, Southington. Burial will follow in St. Thomas Cemetery, Southington. Calling hours will be held from 4 – 7 p.m. on Thursday, January 23, 2020 at the Plantsville Funeral Home. For online condolences and directions, please visit www.plantsvillefuneralhome.com.

To order memorial trees or send flowers to the family in memory of Andrew F. Hubeny, please visit our flower store.