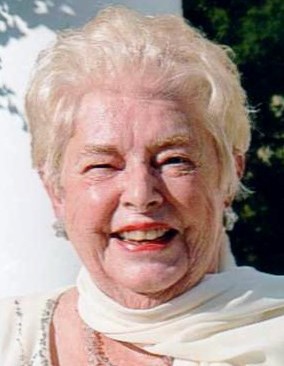 Anna Soucie Fox, 92, of Port Orange, FL and formerly of Southington, passed away on Thursday, February 14, 2019 due to a short illness. She was the daughter of the late George A. Fox and Augusta (McCormick) Fox.

Anna was born in Hartford, CT on June 11, 1926. In Florida, she was an active member of Our Lady of Hope Catholic Church, treasurer of Oakland Park Homeowner’s Association, Inc., member of the YMCA and other local societies.

She had a long career as a banking officer with Bank of America, formerly Fleet Bank of New England in Connecticut and Suntrust Bank in Daytona Beach, FL. She had been an instructor for the American Bankers Association for many years and a graduate of their school. She was also a recipient of the Daughters of the American Revolution Award, attended Connecticut State College and was an active member of Lewis High School, Class of 1944.

Anna is survived by her son George Soucie and his wife Nancy of Southington, daughter Mary Sima and her husband John of Southington and son Arthur Soucie and his friend Jo Ann Owens of FL; 4 grandchildren: John Sima IV of Middletown, George Sima of Georgia, Eric Soucie of Washington, DC and Nicole Ferland and her husband Zachary of Enfield, many nieces and nephews and her special cousins, Frances and Russell Hull of North Haven. She was predeceased by her husband George Soucie, her grandson, Daniel Soucie Blackert and her sister, Catherine Powers.

Funeral services will be held at 9:00 a.m. on Tuesday, February 19, 2019 from the Plantsville Funeral Home, 975 S. Main St., Plantsville with a 10:00 a.m. Mass of Christian Burial at the Church of Saint Dominic, 1050 Flanders Rd., Southington. Burial will follow in St. Thomas Cemetery, Southington. Calling hours will be held from 4 – 7 p.m. on Monday, February 18, 2019 at the Plantsville Funeral Home.  For online condolences and directions, please visit www.plantsvillefuneralhome.com.

To order memorial trees or send flowers to the family in memory of Anna Soucie Fox, please visit our flower store.