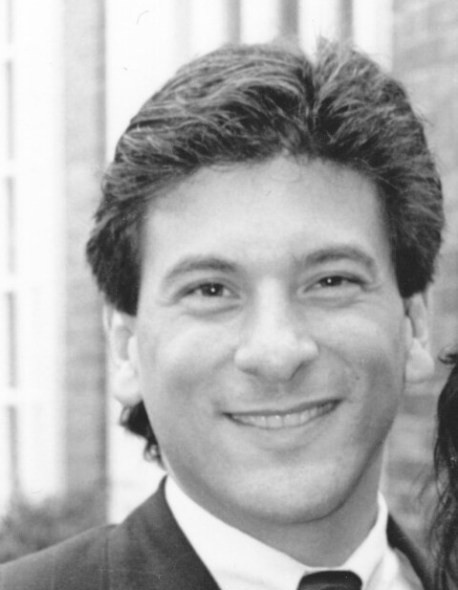 Costantino “Tino” Dangelo, 53, of Southington, formerly of Milford, passed away on Tuesday, May 30, 2017 at St. Francis Hospital.
Born in Buffalo, NY on September 25, 1963, he was one of six children to the late Anthony and Frances (Marra) Dangelo.  Raised in Hyde Park, NY, he was a graduate of F.D. Roosevelt High School, and went on to receive his Bachelor’s Degree in Electrical Engineering from the University of Hartford and his Master’s Degree in Finance from Rensselaer Polytechnic Institute.  He was a member of Tau Kappa Epsilon (TKE) fraternity.  He married Lee Ann (Chupka) in 1997 and they settled in Milford where they raised two adored daughters, relocating to Southington three years ago.  Tino worked as an engineer for Yankee Gas, now Eversource Energy, for close to twenty years.  A golf enthusiast, he also had a passion for cooking, especially with his daughters.  He took great pride in making his specialty, homemade pasta, for family and friends.  Tino always cheered for the Buffalo Bills. A man of strong Christian faith, he found much support throughout his illness as a member of the Faith Living Church community. Tino will be missed dearly by his family and wide circle of friends, leaving many cherished memories.
In addition to his wife, Lee Ann, he leaves his daughters, Gianna and Gabriella; his sisters, Rosary Ann Hoffnagle, her husband, Bob, and their children, Phil and Bobby Dale, Francine Green, her husband, Michael and their daughters, Sarah and Katie, Debby Dangelo, and Bernadette Fults and her husband, Walter; his brother, Nelson Dangelo, his wife, Deb and their children, Bernadette and Anthony; 5 great nieces and nephews; and his mother and father- in-law,  Andrew and Janice Chupka, Jr. of Torrington.
Funeral services in celebration of Tino’s life will be held on Monday, at 11 a.m. at Plantsville Funeral Home, 975 S. Main St, Plantsville.  Family and friends may gather before the service, from 9-11 a.m.at the funeral home.
In lieu of flowers, Tino may be remembered with donations to the Dangelo Education Fund established for his daughters at TD Bank.  Checks should be made out to the Dangelo Education Fund and mailed to Mrs. Karen Veltri, 1433 Flanders Road, Southington, CT 06489.

To order memorial trees or send flowers to the family in memory of Costantino "Tino" Dangelo, please visit our flower store.