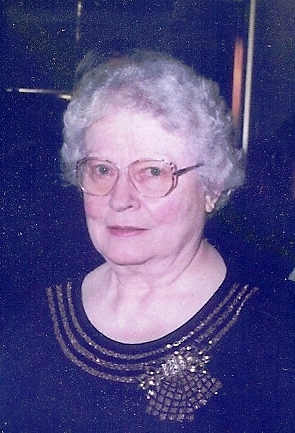 Esther May (Sorber) Thomson, 97, of Southington, formerly of Old Saybrook, passed away on Tuesday, May 9, 2017 at Southington Care Center.

Born in New Brunswick, NJ on August 23, 1919, she was the last surviving of three children to the late Clarence and Della (Zearfoss) Sorber.  Raised and educated in Pennsylvania, Esther was a 1940 graduate of the Wilkes-Barre General School of Nursing, and immediately began her career at the New York Hospital for the next nine years.   Shortly after her marriage to the late Dr. A.W. Thomson in 1943, they relocated to the Connecticut shoreline, residing in Haddam and, later, Old Saybrook where they started their family and where Esther continued her love for nursing at the Saybrook Convalescent Hospital until her retirement in 1988.  She then became a volunteer at Red Cross blood drives, collected for the Heart Fund, and taught at her church school.

A true nature lover, Esther enjoyed the views of Long Island Sound, watching the birds at her feeders, maintaining her home and grounds, including mowing the lawn, and tending to her flower and vegetable gardens.  She also enjoyed the companionship of her Cocker Spaniels.  Esther will be remembered for her strength and independence, and her many years of selfless care for others, and will be greatly missed.

Esther is survived by her son and daughter-in-law, James and Pamela Thomson of Plantsville; her granddaughters of whom she was so proud, Sarah and Kayla Thomson; her niece, Linda and nephews, William, Jr. and Gary.  She was predeceased by her brother, William Sorber, Sr., her sister, Elma Brandt, and her niece, Gail.

The family would like to thank her Orchards caregiver, Vivene, for her compassion and friendship, and to the wonderful staff at Southington Care, all who affectionately called her Grandma.

In lieu of flowers, Esther may be remembered with contributions to The Orchards at Southington Activities Fund, 34 Hobart St., Southington, CT 06489.

Funeral services in celebration of Esther’s life will be held on Saturday, May 20, 2017 at 11 a.m. at Plantsville Funeral Home, 975 S. Main St, Plantsville, CT.  Family and friends may gather one hour prior to the service, from 10-11 a.m. at the funeral home.  Esther will be laid to rest privately at Oak Hill Cemetery at a later date.

To order memorial trees or send flowers to the family in memory of Esther May Thomson, please visit our flower store.