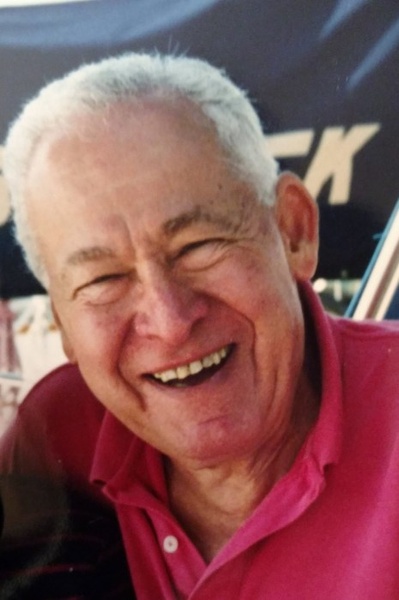 Harvey H. Scheiner, 94, of Southington, passed away peacefully on Monday, March 5, 2018 at his home. He was the beloved husband and soulmate of Priscilla (Smith) Scheiner for 39 years.

Born on January 26, 1924 in Brooklyn, NY to the late Louis and Belle (Fisher) Scheiner, he had been a longtime Southington resident. Harvey’s father emigrated to New York from Ukraine, Russia in 1906. He graduated from Penn State University, where he was president of the student body and president of his fraternity, Beta Sigma Rho. He proudly served in the U.S. Army during WWII.

Before his retirement, Harvey worked as a buyer of men’s and boy’s clothing and then as a lighting specialist at Grand Light and Supply in New Haven, CT.

Harvey was an avid sailor since he was 8 years old. He and his wife Priscilla cruised on their sloops, Happy Face and Illusion, for many years on Long Island Sound. He was a former member of the Milford Yacht Club and crewed for friends on several Bermuda sailing races. He also had a passion for sports cars and classical music.

In addition to his loving wife Priscilla, he is survived by 2 daughters, Ellenjane Scheiner of Bedford, MA and Amy S. Shaw and her husband Dr. Michael Shaw of Baldwinsville, NY and 3 grandchildren; Kevin Holland and his wife Laura of Tampa, FL and their children Liam and Logan; Benjamin Shaw of Cambridge, MA and Albert Shaw of Baldwinsville, NY.  He is also survived by 2 step-daughters, Sandra Bourgeois of Marathon, FL and Jody Bourgeois of Seattle, WA, one step-son, Louis Bourgeois and his wife Catty of Ecuador and their daughter, Amelie; step-granddaughter, Kimberly (O’Toole) Eckhardt and her husband Eric of Framingham, MA and their daughters, Adriana and Kaitlyn. Harvey also leaves his loving sister, Marian S. Azar of El Paso, TX and many nieces and nephews. He was predeceased by his step-daughter, Lynn Bourgeois and granddaughter Jodi Shaw.

Services will be held privately and at the convenience of the family. Plantsville Funeral Home, Plantsville, CT has been entrusted with handling the arrangements.  For online condolences, please visit www.plantsvillefuneralhome.com.

To order memorial trees or send flowers to the family in memory of Harvey H Scheiner, please visit our flower store.
Send a Sympathy Card