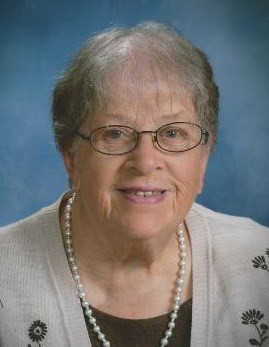 Joan (Bussett) Brooks, 83, of Southington, passed away peacefully on Monday, October 16, 2017 at HOCC at New Britain.

Born on Dec. 14, 1933 in New Haven to the late Alfred Sr. and Julia (O’Connor) Bussett, she had been a longtime Southington resident.

Joan graduated from Southington High School and attended Stone Business College. She was a longtime active member at the Plantsville Congregational Church. She was a teacher and then director at the Plantsville Community Nursery School for almost 50 years. She also volunteered at the church making meals for people in need. One of her greatest joys was feeding her family and friends, preparing large meals at the drop of a hat.

She is survived by her daughter Lori Brock of Kentucky; sister-in-law Ruth Ann Bussett of Southington and many nieces, nephews, great-nieces and great-nephews. She was predeceased by her husband Arthur Brooks, son Robert Brooks and two brothers, Alfred and Ray Bussett.

In lieu of flowers, donations in Joan’s memory may be made to the Plantsville Congregational Church, 109 Church St., Plantsville, CT 06479.

To order memorial trees or send flowers to the family in memory of Joan B. Brooks, please visit our flower store.
Send a Sympathy Card