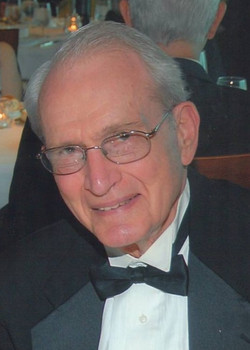 Joel Norton Davis passed into eternal rest on May 22, 2015, at the Alzheimer's Resource Center, Plantsville, Connecticut, following a number of years of illness. He had resided in Southington for thirty- six years. He was born on the Davis family homestead in the Nut Plains section of Guilford. Before moving to Southington in 1979, he resided with his family for twenty years in Durham.

He was preceded in death by his parents, Frederic Griswold Davis and Margaret Louise (Norton) Davis; and by his younger siblings, Frederic Davis and Ruth Davis Osborn.

Joel is survived by his loving wife of 64 years, Ruth Ann (Coleman) Davis, of Southington; his son and daughter-in-law Keith Frederic and Patricia (Hammer) Davis of Sheridan, Wyoming; his daughter and son-in-law Rebecca Ruth Davis and Mark Jones of New Windsor, NY; one grandson, Gregory Rief Kanan of Kingston, NY; and by his older sister, Martha Davis Rebuzzini of Guilford. He is survived by the children of Martha and William Rebuzzini and their families: Peter, Penelope, and their daughter Margaret Rebuzzini of Guilford; Brian Rebuzzini of San Diego, California; Anne Rebuzzini of Guilford, and her son Cole Williams of New Haven; Carol Lydia Rebuzzini and Adelchi Becker of Guilford. He is also survived by the children and families of Ruth Davis Osborn: Jeffrey Osborn of Norcross, Georgia; Joel Osborn of Seattle, Washington; and Melissa Osborn Dougherty of Haddonfield, New Jersey.

Joel's childhood and youth were spent on his parents' Sunrise Farm in Guilford. Located near the Madison town line, on the south side of Route 1, the farm extended over abandoned trolley tracks to the salt meadows to the east. He loved nearly every aspect of farm life, from milking the dairy herd to driving a team of plow horses and tinkering with machinery. In high school he was active in basketball, six-man football, and track and field. He never forgot the sight of one of the great German zeppelins passing overhead in the late 1930s, and during World War II he and his father took turns "airplane spotting" from a stone tower near the center of Guilford.

After graduating from Guilford High School in 1945, he worked for two years on the farm. In the fall of 1947, he traveled by train with his steamer trunk to Wooster, Ohio, to enroll in the College of Wooster. He married Ruth Ann Coleman, a fellow graduate, on March 30, 1951, and graduated in June with a degree in history and secondary education certification. During that summer, Joel and Ruth Ann took courses at Kent State University to earn elementary teaching certification. In September, they became half of the elementary school staff in rural Burbank, Ohio.

In 1952, Joel returned to Guilford, where he taught at the Calvin Leete School. His son Keith was born in 1952, followed by daughter Rebecca in 1955. In 1959, the family moved to Durham. Joel taught history at Durham High School for several years before becoming the school's principal. He earned a Master's Degree and advanced certification in Administration from the University of Hartford. In 1969, he was named Vice Principal of Southington High School. In 1978, he became the Director of Secondary Education there, remaining in this position until his retirement in 1987.

Devoted to public service, Joel was active in each of the communities in which he lived. In Guilford, he was a member of the newly formed Planning and Zoning Commission. In Durham, he served on the Board of Selectmen; was a charter member and president of the town's Exchange Club; and was a deacon of the United Churches of Durham. In Southington, Joel was active in the Plantsville Congregational Church and was instrumental in reviving its church fair more than twenty years ago. This is now considered the largest church fair in Hartford County due to continued enthusiasm and hard work of the congregation. Joel was also a longtime member and president of the Southington Exchange Club.

Joel had an enormous curiosity about the world. He was an avid reader, with a particular interest in history and the natural world. Over the years, he especially enjoyed trips to the American West, Spain, Greece and a boat trip on the canals of Belgium and the Netherlands.

He was a remarkable craftsman and a skilled woodworker. In retirement, Joel enjoyed visiting his children in their out-of-state homes, where he served as carpenter in residence. Beginning in the 1990s, Joel developed a deep interest in miniature basketry, with particular expertise in fine ash-splint Shaker designs. He became an active member of the Northeast Basket Makers Guild as well as basket associations in other states. For many years he attended basket conventions to display his work and to teach classes. In this period, his name was listed in the Early American Life directory of the top 200 American Craftsmen. In 2000, a letter from the White House invited him to design an ornament for the national Christmas tree in the Blue Room. The theme was "Preserving America's Treasures" and the invitation had gone out to groups representing basket makers, tinsmiths, and doll makers. He had the honor of attending a reception at the White House to view his handiwork on display.

Joel never lost his love for farming and for the land. He took time nearly every summer-aided in his later years by nephew Peter Rebuzzini-- to gather salt hay from the meadows in Guilford to sell to gardeners seeking weed-free mulch. Joel carried on the tradition of the East Creek Meadow Owners Association, an organization of farmers begun in the 1830s dedicated to the upkeep of the local salt meadows and the sluice gates at the Guilford dock that controlled the tidal flow through the meadows. Joel was the last of the line of those men who maintained the gates, which were finally turned over to the town of Guilford. In 2007, with the assistance of the Story Corps program, Joel recorded a history of salt haying on the Connecticut meadows with personal notes on his family's involvement. The original recording is in the National Archives.

The family wishes to thank the Alzheimer's Resource Center's staff who provided loving care for Joel during the last two years of his life.

The family wishes to thank the Alzheimer's Resource Center's staff who provided loving care for Joel during the last two years of his life.

To order memorial trees or send flowers to the family in memory of Joel N. Davis, please visit our flower store.
Send a Sympathy Card