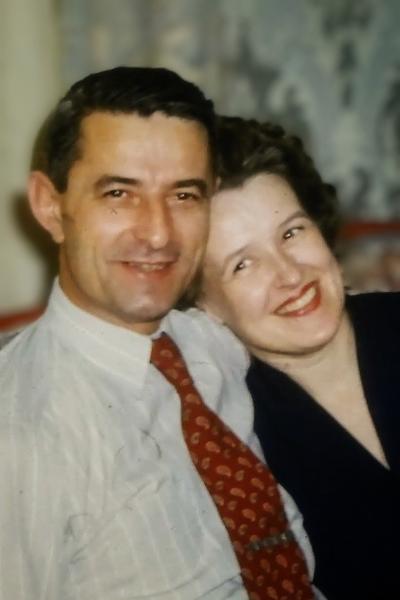 Marie Elizabeth Krafcik (née Gabriel), long-time resident of Southington, Connecticut; Lake Havasu, Arizona; and Orange County, California, died January 21, 2022, at Arbor Terrace, in Dacula, Georgia. An exemplary member of the Greatest Generation, she was 102 years old, and a partner to her husband George for 47 of those years, until his passing in 1984. Preternaturally incisive, a fast-walking, coffee-loving voracious reader and Scrabble player, meticulous treasurer for her Lake Havasu community club, liberal and tolerant of others yet proudly supportive of her family, Marie raised her eight children in a way that enabled them to be their best, amidst humble circumstances for all. She directly impacted the lives of hundreds, and was an inspiration to so many who came to know her, throughout the many stages of her long and adventurous life.

Born September 28, 1919, in Albany, New York, she was the daughter of the late Frederick and Wilhelmina Gabriel (née Gresens, later Cloutier). She grew up on 92 Elizabeth Street in Albany, and for three years, from August 1929 through October 1932, during the depths of the Great Depression, was benevolently cared for by the Parsons Child and Family Center, which was then known as the Albany Orphan Asylum. Marie traveled with her mother Wilhemina (Minnie) to Meriden Connecticut, graduating from high school with honors there before her 16th birthday, before meeting and then marrying her faithful husband, George Jacob Krafcik, on August 19, 1937, in Carmel, New York. They were married for 47 years, living most of those years on Oak Street in Southington, Connecticut, where they raised eight children.

Marie is survived by two daughters, Ann Eileen Porter (who also mourns the recent passing of her husband Terry) of Isle La Motte, Vermont; Kathleen Ann Lacourciere (and husband Richard) of Vero Beach, Florida and Vinalhaven, Maine; and four sons, George Michael Krafcik (who also mourns the recent passing of his wife Joanne) of Summerfield, Florida; Robert Joseph Krafcik (and his wife Joan) of Flowery Branch, Georgia; Michael Paul Krafcik (and his wife Maryette Braly) of Simsbury, Connecticut; and John Francis Krafcik (and his wife Leila Knob-Krafcik) of Austin, Texas; twelve granddaughters, twelve grandsons, dozens more great-grandchildren and great-great-grandchildren, and her half-sister, Marilyn Paju. She was pre-deceased by her husband George (1984); her sons, both Navy veterans, Andrew Clement Krafcik (1994, who is survived by his wife Judith) and Frederick Robert Krafcik (2021); her brothers Herman and Frederick; her half-siblings Minnie, Rita and Robert; her father Frederick Gabriel; her beloved stepfather Hector (Cookie) Cloutier; and her dear mother Wilhemina (nee Gresens, Gabriel) Cloutier.

A memorial service will be held at noon Saturday, July 30, at the Church of St. Dominic at 1050 Flanders Road in Southington, Connecticut. All are welcome. Burial will be at Oak Hill Cemetery in Southington, after the memorial service. In lieu of flowers, contributions in her memory may be made in her name to the Northern Rivers Family of Services, Parsons Child and Family Center, PO Box 8899, Albany, New York 12208, or via the web at NorthernRivers.org/giving.

To order memorial trees or send flowers to the family in memory of Marie E. Krafcik, please visit our flower store.
Send a Sympathy Card