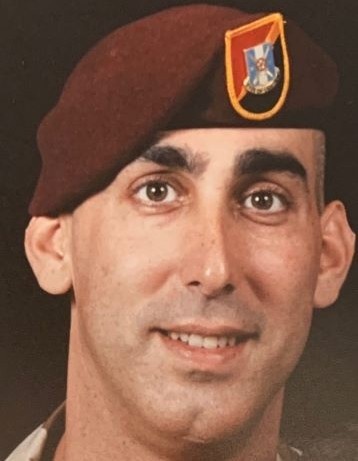 Retired Master Sergeant Robert “Bobby” C. Burgos passed away unexpectedly on October 21, 2020. He served overseas in both Iraq and Afghanistan on multiple tours of duty. He earned his Airborne Wings as well as his CAB (Combat Action Badge).

MSG. Burgos was born on January 25, 1974 in New Britain, CT to Carlos and Sandra (Green) Burgos. In 1992, he graduated from Southington High School and proceeded to join the United States Army where he proudly served for 24 years until his retirement in 2016.

As a child, he played football for the Southington Midget Football league. He played for the Bronco’s which spurred his strong admiration for the Denver Bronco’s later in life. He also swam on the Southington High School swim team throughout his high school career.

MSG. Burgos was a brave and loyal soldier, as well as a patient and loving father, son, brother and American Hero. He was a proud Dad before anything and his children were his life. His most cherished role in his life was becoming a father to both his daughter Aiko and his son Joseph.

He made Hawaii his home and embraced his love for the ocean and all the creatures of the sea by becoming a scuba diving instructor. He loved swimming and exploring the water. He found solace in the beach and spent as much time as he could enjoying North Shore whenever he could.

Besides his parents Carlos and Sandra Burgos, Bobby leaves his daughter Aiko and son Joseph Burgos and their mother Shino Burgos of Ewa Beach, HI; his brothers, Joseph Torres of NJ, and Tawn Burgos of Bristol, CT; his sister Jennifer Campanello and her husband Michael of Wethersfield, CT; his grandmother Natalie Zimmerman of AL; aunts, uncles, cousins and many nieces and nephews.

Bobby was predeceased by his grandfathers, Harold Green of Southington, CT and George Zimmerman of Lillian, AL as well as his grandmother Justina Rivera Burgos of Puerto Rico; as well as long-time family friend Cathy Morris.

In lieu of flowers, the family wishes that memorial donations be made to the Robert Burgos  fund by visiting the Go-Fund-Me page, https://www.gofundme.com/f/robert-burgos.

A graveside Service with Military Honors for Bobby will be held on Monday, November 23, 2020 at 11:00 a.m. at Oak Hill Cemetery, Southington. Plantsville Funeral Home is honored to be assisting with the arrangements. For online condolences, please visit www.plantsvillefuneralhome.com

To order memorial trees or send flowers to the family in memory of MSG. Robert C. Burgos, please visit our flower store.
Send a Sympathy Card