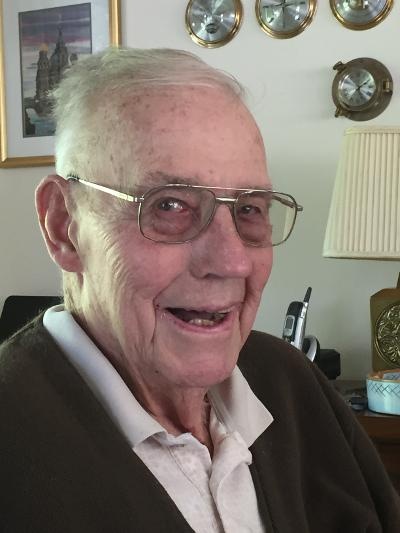 Raymond “Hank” E. Fornwald, 97, of Southington, longtime Cheshire resident, passed away peacefully at his home on Wednesday, December 16, 2020. Hank had been the loving husband of Gloria (Orr) Fornwald for 72 years.

Hank was born on July 1, 1923 in Johnstown, PA, the only child to the late Rufus and Marion (Smith) Fornwald.

Hank enlisted into the officer training program on December 4, 1942 for the United States Marine Corps. After reporting to active duty in July, he enlisted in Navy V-12 training program at Bucknell University. He then switched over to the United States Navy and was commissioned as an Ensign in June of 1944, assigned to the USS Capable in the South Pacific. He returned to the states and reported aboard the USS Aaron Ward and USS AE Anderson.

Hank separated from the service on July 1, 1946 and in June of 1947 he returned to Bucknell University where he was a member of the Phi Kappa Psi fraternity and earned his Bachelor’s Degree in Economics.

Hank started his career at Liberty Mutual in Pittsburgh and in June of 1948, he married a beautiful woman he met on a blind date. Hank and Gloria lived in Pittsburgh until he was offered a promotion that brought them to Boston. After 6 years, he was transferred again, this time to CT. In 1969, after a successful 26-year career at Liberty Mutual, fueled by a lifelong entrepreneurial spirit, Hank started American Seal Engineering Co. alongside two business partners. They successfully ran the company for 30 years and retired in 1999. After his retirement, Hank and Gloria enjoyed wintering in Puerto Rico. He was a passionate golfer and a charter member of the Farms Country Club in Wallingford. Hank was also a proud member of the American Legion Post 72.

Due to the current health concerns surrounding COVID-19, a memorial service will be held at a future date. Plantsville Funeral Home has been entrusted with handling the arrangements. For online condolences, please visit www.plantsvillefuneralhome.com.

To order memorial trees or send flowers to the family in memory of Raymond E. Fornwald, please visit our flower store.
Send a Sympathy Card