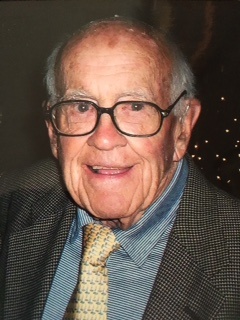 Richard Baldwin Hutton, son of the late Lindsay Peter Hutton and Carrie Baldwin Hutton, was born February 9, 1918, in Southington, CT. He passed away in his home on December 16, 2016 surrounded by his family. He was a graduate of the Southington Public School System and of Brown University, Phi Beta Kappa. He married Virginia Bartlett Cutter of Arlington, MA on January 21, 1942 and following service in the United States Army Air Corps during World War II, the couple settled in Southington, CT. Richard was associated during his lifetime with the local men’s clothing store, P. Hutton and Son, Inc., with branch stores in North Haven, Guilford and Ridgefield and with Hutton and Cook, Inc., in Cheshire. He and his wife, Virginia, are the parents of Sally, and husband Dr. Robert Telzrow of Seattle, WA; Douglas and wife Kathleen O’Rourke of Southington, CT; Christina, and husband Dr. Frederick Schnure of Mattapoisett, MA; David Hutton of Southington; deceased, John of New York, NY; Martha and husband John Bullwinkel of Washougal, WA and Nancy and husband Peter Farrell of Montpelier, VT. Their grandchildren include Jeremiah and Sarah Telzrow; Sean, James and Nicholas Hutton; Virginia, Emily and Martha Schnure; Rachel and Paul Farrell and great-grandchildren, Adelaide, Tess and Cora Telzrow.

Donations in Richard’s name may be made to the ARC of Southington (SARC) 201 West Main St., Plantsville, CT 06479.

A service to honor Richard’s life will be held at 2 pm on Saturday, May 13, 2017 at the First Baptist Church, 581 Meriden Avenue in Southington. Plantsville Funeral Home has been entrusted with handling the arrangements. For online condolences, please visit www.plantsvillefuneralhome.com.

To order memorial trees or send flowers to the family in memory of Richard Baldwin Hutton, please visit our flower store.