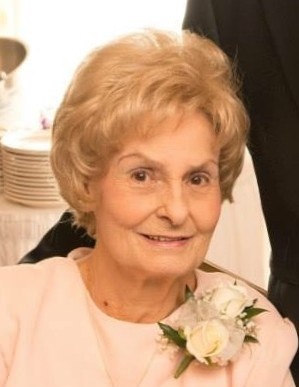 Rita E. (Gelinas) Rousseau Sciortino, 94, of Southington, passed away peacefully on Saturday, May 26, 2018 at MidState Medical Center. She had been the loving wife of the late Anthony Sciortino for 28 years. She was predeceased by her first husband, Edward J. Rousseau, whom she shared nearly 25 years of marriage with.

Born on January 5, 1924 in Waterbury to the late Lucien and Diana (Langlois) Gelinas, she had been a longtime Southington resident.

Rita was one of the original parishioners of St. Aloysius Church and was a member of the church choir. She loved music and was active in Southington Community Theatre and the Southington Festival Chorale. She also enjoyed cooking, baking, playing Bingo, knitting and crocheting.

Rita is survived by 2 sons, Alan Rousseau and his wife Sharon of Southington and Mark Rousseau and his wife Diane of Wallingford and two granddaughters, Kylie Paradis and her husband Stephen of Southington and Lauren Rousseau of Newport, RI. She is also survived by her sister, Theresa Bessette and her husband Robert of Watertown; one step-son Paul Sciortino of Waterbury, one step-daughter Teresa Sciortino of Waterbury, one step-grandson, Scott Antonucci of Los Angeles, CA and nieces and nephews. In addition to her husbands, she was predeceased by her oldest son, Robert Rousseau and 2 young brothers, Henri and Maurice Gelinas.

To order memorial trees or send flowers to the family in memory of Rita E. Rousseau Sciortino, please visit our flower store.