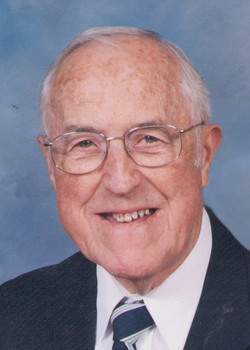 Robert H. Hart, 96, passed away April 14, 2015, at MidState Medical Center in Meriden. He was the beloved husband of the late Viola (Gardinier) Hart for 66 years until her passing in 2008.

Bob resided at the Orchards at Southington since 2006. Born in Meriden on June 7, 1918, he was the son of the late Henry J. and Suzanne (Bellerose) Hart. Bob was a graduate of Meriden High School, class of 1935, and the University of Connecticut, earning his Master's from the Yale University-New Haven Teachers College joint program and completed post-graduate work at the University of Hartford.

He was the drum major of the Meriden High School Band and of the University of Connecticut Concert and ROTC bands. He served honorably in the U.S. Army during World War II as a 1st Lieutenant stationed in India for 28 months. He was a math teacher for many years at Meriden High School, becoming assistant principal of Maloney High School in 1957, and subsequently principal from 1961 to 1977.

Bob was extraordinarily devoted to community service. He was a member of many civic organizations including the Meriden Rotary Club, the Meriden Planning Commission, and the Meriden Y's Men. He was treasurer of the Meriden Teacher's Association and the Meriden School Administrators Association and also served in many professional educational organizations. After retiring from education he earned his license as a Realtor and was active in real estate for many years. He helped to organize two local chapters of the AARP and became President of each, serving as AARP division district director. For 45 years Bob served in many capacities with the Meriden School Employees Federal Credit Union, which created a scholarship named in his honor. Bob served as a Moderator, Trustee, and Deacon for the First Congregational Church of Meriden. He and his wife moved to Southington in 1995 where he became a member of the music committee at the Southington First Congregational Church.

He is survived by his four children; Nancy H. Tillberg and her partner, Jorge Figueroa, of Madison, Linda J. Ruggeri and her husband, Gary, of Watertown, Robert P. Hart and his wife, Susan, of East Hampton, and Dr. Ronald P. Hart and his wife, Mary Ann, of Cranford, NJ. He leaves his grandchildren Michael Tillberg, Catherine Hart and her wife, Aoife, Jill Guerrera and her husband, Sergio, and Jessica Ruggeri and her partner, Michael Devin, and his great-granddaughter, Ava Isabelle Guerrera. He is also survived by his niece, Janis Buck of Sunnyvale, CA. He was predeceased by a daughter-in-law, Elizabeth Hart, a grandson, Thomas Hart, his sisters, Elsie Erla and Irene Hart, and his nephew, Wayne Erla.

A funeral service will be held Saturday, April 18, 2015, at 10:00 a.m. at the Plantsville Funeral Home, 975 S. Main St., Plantsville, CT. Burial with military honors will follow in Walnut Grove Cemetery, Meriden. Calling hours will be Friday, April 17, 2015 from 5:00 pm. to 7:00 p.m. at the Plantsville Funeral Home. In lieu of flowers, a donation may be made to a charity of the donor's choice. For online condolences and directions, please visit www.plantsvillefuneralhome.com.

To order memorial trees or send flowers to the family in memory of Robert H. Hart, please visit our flower store.