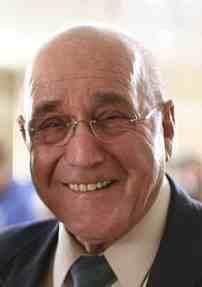 Robert A. Marotto, 92, passed away on June 16th at his home in Southington.

He is survived by his wife of 71 years, Virginia (Lofgren) Marotto and his children, Kristine Telke and her husband Leland, Lynn Palmieri and her husband Tony, and Robert Marotto Jr. and his wife Barbara.

Robert was born on September 8, 1928 to the late Robert and Carmella (Calabrese) Marotto, formerly of Eden Avenue in Southington. He graduated from Goodwin Technical School in New Britain but not before he served in the US Army as World War II came to an end. He rose to the rank of Sargeant and served in Okinawa as part of the Allied occupation force charged with ensuring peace and order after the Japanese surrender.

After his honorable discharge, Robert completed his high school degree and then attended the Hartford State Technical Institute where he studied drafting and tool design, graduating at the top of his class.

Robert retired in 1986 after working for 35 years at Revere Corporation of America in Wallingford, Connecticut. He became the General Manager of a successful operation that designed, developed and manufactured instruments for aerospace and other industries. He was involved in developing the Polaris missile system and instruments used at Indianapolis Speedway.

His mastery of the industrial arts was evident in the furniture making he did for his family over the years. Pieces included matching canopy beds for his daughters, dropleaf tables, assorted bureaus and night stands, a dining room table and entertainment center. The style of many pieces was colonial, matching the tradition of the New England furniture makers.

Upon his retirement, Robert served for many years as an aquatic ecology instructor for the Connecticut Department of Fisheries. Each year he taught all of the fourth-grade classes in Southington about fishing and the ecology of lakes, rivers and streams. He especially enjoyed the fish fry finale of each of these classes with fish caught by the fourth graders.

He and his wife also owned and operated Ginny and Bob's Antiques during these years. Together they developed a special interest in and extraordinary knowledge of Depression Era Glass. They became very active members of the Nutmeg Glass Club for which Robert served as president and treasurer.

A memorial service for Robert will be held at 11:00 a.m. on Saturday, June 18th, 2022 at the Plantsville Funeral Home, 975 S. Main St, Plantsville. Burial with military honors will follow at Oak Hill Cemetery, Southington. Calling hours will be held before the service from 10:00 - 11:00 a.m. at the funeral home. Plantsville Funeral Home has been entrusted with handling the arrangements. For online condolences, please visit www.plantsvillefuneralhome.com.

To order memorial trees or send flowers to the family in memory of Robert A. Marotto, please visit our flower store.
Send a Sympathy Card