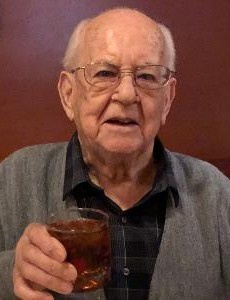 Stephen was born December 26, 1918, in Seymour, Connecticut, to the late Paul and Helen Kozlowski.

He worked his entire career in the automobile business, primarily as an upholsterer.  He was the co-founder of Acme Auto Top in New Haven.  Stephen was married to Geraldine LaDuke Kozlowski for 74 years; she passed away in 2014.  He loved spending time with his family, gardening, puttering around the house, Sunday drives, grocery-shopping with his granddaughter, Donna, having Chinese dinners – or fried seafood – with his daughter Jan and her husband, Raymond, and, especially, nights with a full moon.  He also grew quite fond of a Manhattan before dinner.

There will be a celebration of Stephen’s life at a later date. Plantsville Funeral Home has been entrusted with handling the arrangements.

To order memorial trees or send flowers to the family in memory of Stephen F. Kozlowski, please visit our flower store.