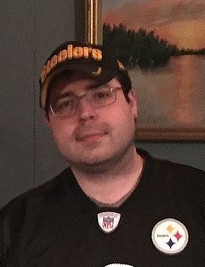 Thomas E. Feeney, 33, of Southington, passed away on Wednesday, January 31, 2018 at his home. He was a loving son, brother, grandson, uncle and friend.

Tom was born on September 27, 1984 in New Britain. He graduated from Southington High School in 2003. Tom worked as an assembler at Camlock Systems. He was a diehard Steelers fan and a genuine Patriots hater. He was also an avid WOW player and had a large virtual family. He liked to cook and loved to bake bread. Most of all Tom enjoyed spending time with his family.

He is survived by his father Thomas J. Feeney of Las Vegas, NV and mother Ellie Dietz and her husband Roger of Plantsville; his sister Bryanna Feeney and Brian Muehlenbein and their son Damian of Southington; three brothers, Christian, Daniel, Jack Dietz and his sister Julia Dietz, all of Southington. He is also survived by his maternal grandparents, William and Ellen Brush of Southington, many loving aunts, uncles and cousins and his beloved cat, Venna.  He was predeceased by his aunt, Pamela Brush and paternal grandparents, Thomas and Dorothy Feeney.

A funeral service will be held at 6 p.m. on Monday, February 5, 2018 at the Plantsville Funeral Home, 975 S. Main St., Plantsville. Calling hours will be held before the service from 3 – 6 p.m. at the funeral home. Burial will be private and at the convenience of the family. For online condolences and directions, please visit www.plantsvillefuneralhome.com

To order memorial trees or send flowers to the family in memory of Thomas E. Feeney, please visit our flower store.