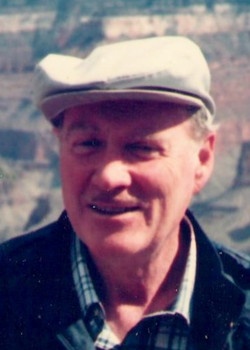 William J. Beard, 94, of Plantsville, passed away peacefully surrounded by his family on Tuesday, November 3, 2015 at HCC at New Britain General. He was born in Waterbury on April 23, 1921 to the late Arthur and Mary (McIlroy) Beard. Bill grew up in the foothills of Colorado, returning to CT at the age of 18. He was the loving husband of the late Eleanor "Ellie" (Paparazzo) Beard. Bill and Ellie raised their children, William A. Beard and Deborah Beard Cabelus in Plantsville where he lived for more than 70 years. Bill was a World War II veteran, serving in the U.S. Navy as an Aviation Machinist Mate. Following his military service, he spent 10 years as a tool maker at Scovills in Waterbury. He then worked as an experimental tool maker for Winchester Repeating Arms Co. in New Haven until his retirement in 1982.

Bill is survived by his daughter, Deborah Beard Cabelus, his grandson, Stephen Cabelus and his wife Erin and his granddaughter Suzanne Kootz and her husband Taras. He was affectionately known as "GGB" (great-grandpa Bill) to his 3 great-grandchildren; Finn, Rowyn and Trent. Bill was predeceased by his son William A. Beard, who was killed in action during the Vietnam War; his sister, Margaret Schumann and his son-in-law, Robert A. Cabelus.

Bill was known for his warmth, kindness and witty sense of humor. He spent many hours target shooting and was known for his steady hand and keen eye. Bill enjoyed Red Sox baseball and the History and Discovery channels. He was always ready with a story and happy to talk to anyone. Bill shared a special friendship with his late son-in-law Robert, with whom he spent much of his time. Bill enjoyed an independent life until the age of 90. In recent years, he continued to enjoy his home with the companionship and care of his beloved daughter Deb. They spent many hours chatting and reminiscing about their family and experiences. Deb provided exceptional care to her "Daddio," keeping him comfortable and satisfying his famous sweet tooth. Bill was blessed to be surrounded by love and happiness.

A special thanks to "K.K.," his trusted and devoted home health aid.

To order memorial trees or send flowers to the family in memory of William J. Beard, please visit our flower store.
Send a Sympathy Card